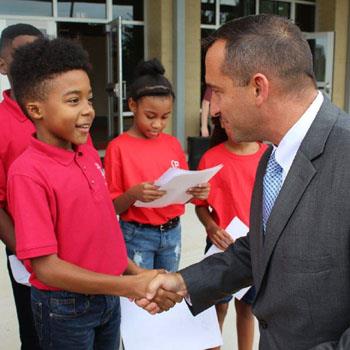 Mike Daria is a man on the move. In fact, one can usually find him walking the hallways of TCS schools at a brisk pace.

"He's definitely a fast-moving, on the go guy and that's definitely what we need for our system," said Terri North-Byrts, director of student literacy. "He's someone who listens and understands our concerns and acts on any conversations we may have with him."

The speed at which he walks underscores the speed in which he works to improve student outcomes for all students. The Tuscaloosa City Schools proudly serves more than 11,000 Pre-K through 12th grade students. Daria's urgency to close the achievement gap is to ensure each and every student achieves personal, academic and career excellence as defined by the system's mission statement.

Daria is a veteran educator who has served in the Tuscaloosa City Schools all but one year in the system--his first--starting in 1996.  He has worked as a TCS English teacher, assistant principal, principal, executive director of personnel and assistant superintendent prior to his current role.

A hallmark of his administration has been his commitment to engage stakeholders on the path the progress for students.