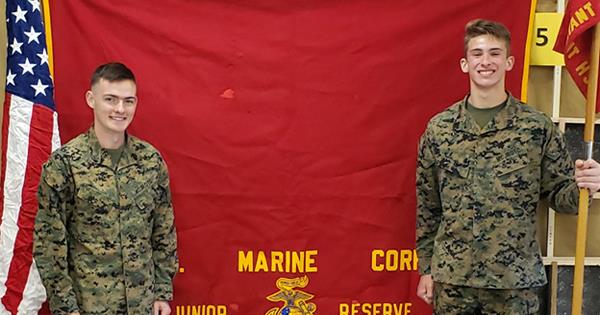 In what has been a trying year for schools across the nation, two cadets from the Paul W. Bryant Marine Corps JROTC program recently received some long awaited news about their future. Cadets Forrest York and Hughes Deschner, both seniors from Northridge High School, received notifications of their respective appointments to the United States Naval Academy and the United States Military Academy (West Point).  This marks the end of over a year long process to gain entry into two of our country’s most elite and storied universities, and the beginning of their journey to obtain their commissions as officers as part of the roughly 1200 Americans from across the country who will form the Class of 2025 at each institution.

Major J.D. York, the Senior Marine Instructor for Bryant JROTC, noted the significance of this accomplishment.  “It’s rare enough to have any cadet selected to the Academies—we’ve only had one previously in the nine years that our program has existed.  To have two in the same year is simply phenomenal, and is a testament to what great kids we have in our program.”

He also noted how the JROTC program was able to assist the two in receiving their appointments.  “To be selected for the Academies you need a nomination, typically from a member of Congress or the President and Vice President.  I’m thankful that our program is a Naval Honor School, which allowed us to provide a separate nomination to both of these fine young men to help them accomplish their goals.”

Cadet York, the son of the Major and Mrs. Maureen York, received notification last week from Congressman Aderholt’s office that he had received an appointment.  “Attending the Naval Academy has been my goal ever since I was able to go there after my freshman year as part of a JROTC summer camp,” he said. “I knew then that I wanted to be a part of the great history and tradition there, and learn at the best engineering school in the country.”  York plans to major in aerospace engineering, and hopes to qualify as a USMC aviator for his military career.

Cadet Deschner, the son of Mr. Monte Deschner and Ms. Pamela Hughes, also received notification from Congressman Aderholt this week.  “I was ecstatic when I heard the news, and very excited for my future at West Point,” he said.  Deschner plans to major in either mechanical engineering or kinesiology, and hopes to qualify as an infantry officer in the U.S. Army.

Aside from getting nominations, both credit their JROTC experience with helping them gain entrance to the Academy.

York stated, “Learning about leadership and having actual experience as a leader in JROTC really helped me understand the role of an officer and the commitment required to get into the Academy.”

“The knowledge, self-confidence, and discipline we learned in JROTC was also helpful, especially during all the interviews we had to do,” Deschner added.